The “Post” or Ilgengut with the house number 3, as it was once called, has a long history in Maria Alm. It was deeply rooted in religion, not only because of its close proximity to the church, but also because of its former owners such as Ilgenhansl, or the Hallein School Sisters, which later became a foundation.

How did the estate come into the possession of the Hallein sisters Franciscan nuns?

(Former congregation of the School Sisters of Hallein). 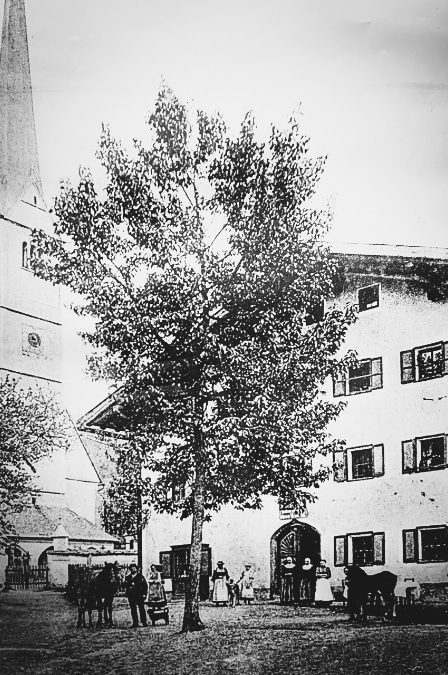 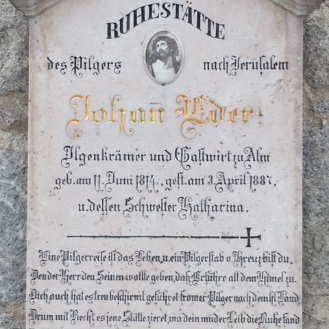 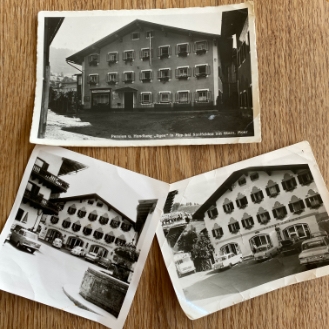 Johann Eder was the “Ilgenkrämer” and innkeeper in Maria Alm. In 1856 he went on a pilgrimage to the Holy Land and to Rome, took souvenirs home and equipped a specially built “Palestine Chapel” with them. On his travels he became aware that children and the sick were the best “cared for” body and soul when they were looked after by nuns.

For this reason, he sold with the purchase contract of the 8th of March 1887

– the “Ilgenkrämerhaus” No. 3 in Maria Alm

The Sisters’ Institute undertook establishing and maintaining a girls’ school, a hospital, and possibly an asylum for the aged instead. The income from the donated property was to provide for the living expenses of the teachers and nurses.

Johann Eder died on the 3rd of April 1887 and was buried near the Palestine Chapel. In 1904 a supply house was built by the congregation and the nuns took over the care of it – thus one of the foundation’s purposes was fulfilled. The girls’ school existed until the Nazi regime.

Increase of the foundation capital

Pastor Franz Frauenschuh von Alm died on the 13th of March 1891. He had appointed the congregation of the School Sisters of Hallein as universal heir on the condition that poor children, especially girls, be educated from the interest on his estate. The will is dated the 15th of October 1888 and reads as follows: Fl 4,590, 22Kr. The sum was increased by benefactors to Fl 7,541, 36Kr. The administration of the money was to be carried out by the Alm parish office, and parish provisional priest Anton Fischbacher was appointed as executor of the will.

It was a church foundation. According to the will of Father Franz Frauenschuh, the education, teaching and care was to be provided by spiritual sisters.

The foundation’s obligations are secured in the land register with the properties of the Eder Foundation.

A brief insight into the practice of the industries at Ilgengut

On the 17th of September 1887, a trade licence was issued to run a restaurant and bar (Bezirkshauptmannschaft Zell am See, number 8760/1887). Trade owner: Congregation of the School Sisters of Hallein)On the 8th of March 1933 the congregation notified Sr Gisela Fuchs (born 1890, place of birth: Altötting, Bavaria) to the Zell am See district administration as manager for the general merchandise trade. On the 13th of April 1933 Sr Gisela Fuchs was approved as Managing Director. The trade mentioned in this document is the catering and bar industry. On February the 19th, 1938 the Zell am See district authority applied to the district administration for a concession for the “small-scale processing” of distilled spirits. On April the 12th, 1938 the concession for the catering and public house business of September 17th, 1887 was granted (see appendix).

On the instructions of the Zell am See tax office, a property register was filled in, showing forest ownership of 2 ha and 90 acres.

Letter of the 16th of August 1945 from the congregation to the Heidenreich company: termination of the employment of Sr Euphemia Franziska Honer as a saleswoman in the general store Heidenreich, because she is urgently needed to teach manual labour lessons (termination on 15th of September 1945).

Change of manager and ownership

4th of October 1939 – Sale of the Ilgenkrämerhaus to Johann and Anna Heidenreich, merchants.

19th of August 1948 – Settlement between the Congregation of the School Sisters of Hallein and the spouses Heidenreich: restitution of the property until the 31st of December 1958. A lifelong user right in favour of Johann and Anna Heidenreich.

17th of January 1961: Mr Heidenreich waives his right to his lifelong right of use (for reasons of age) in return for a life pension from the new tenant of the Ilgenkrämerhaus.

Lease agreement from the 30th of December 1960 with effect from 1.1.1961 Between the congregation of the School Sisters of Hallein and Walter and Elise Jünger concerning the grocery store and the boarding house.

Lease of agricultural ground
Beginning on the 1st of January 1961 between the Congregation of the School Sisters of Hallein and Alois and Regina Rainer, Melchambauer in Alm near Saalfelden No. 18.

Intention to sell by the Congregation of the School Sisters of Hallein: 13th of July 1963: A Roman letter releases the congregation from its foundation obligations, so that the property can be sold without encumbrances. The proceeds were to be invested in the construction of the new kindergarten and day nursery in Hallein.

October 1st, 1965 – Transfer of the “Ilgen” estate to the siblings Schwaiger Josef, Schwaiger Maria and Schwaiger Kathi. Securing the life annuity for Mr. Heidenreich through a lien on the property of the new kindergarten in Hallein. Mr Johann Heidenreich died on 6. 8. 1986. Through many changes of ownership, the former residential building was transformed into a grocery store, where the local post office was also located. Even today the “Maria Almer” know the house as the Post.

In spring 2019, construction work began to preserve, restore and modernise the house.

In winter 2020 the time has come, the Post at the village square of Maria Alm will be reopened. Be excited!

In spring 2019, construction work began to preserve, restore and modernise the house.

In winter 2020 the time has come, the Post at the village square of Maria Alm has been reopened. Come visit us!